We had an exciting day yesterday here in the mountains. A week or so ago I wrote about all the bird nesting activity we’ve been having around our home. While the phoebes and juncos had finished with their nests, the wrens nesting on our deck were still very active. The adults had been busy with their non-stop food delivery to the young ones we could hear cheeping in the nest. A little head or two had begun peeking over the top of the board in the roof structure which hid the nest from our view. Then during this past week one or two of the young wrens sometimes climbed up from the nest to sit briefly on the board, surveying their surroundings before diving back into the nest when their parents approached with food.

Yesterday Carole and I had to go out of town for an appointment with our departure planned for 11:00 am. We ate breakfast in our usual spot where we could enjoy watching the coming and going of the wrens. Two young wrens we had seen before seemed even more active than on most days, coming up from the nest after every visit by the parents. Sometimes one would even stay sitting on the board when the adult returned with food and fed the eager young one. Once or twice the boldest young wren hopped along the board until it was about a foot away from the nest, sat for a few seconds, and then hurried back into the nest again. On some of its ventures out this wren would grip the edge of the board with its feet and lean over to look down to the floor eight feet below, occasionally flapping its wings for a few seconds but still holding tightly to the solid wood under its feet.

We wondered whether all this activity meant the young were getting closer to the time when they had grown enough to be ready to leave the nest. Surely it must be getting crowded in their tiny home since they now appeared to be about the same size as the adults, if not slightly larger. As we continued to watch, the two little heads we had seen peeking from the nest area became three little heads for the first time. After a few more minutes all three babies decided to climb up and perch on the board. Three little wrens, all sitting side by side and looking at their larger world. What adventurers they were.

By that time we needed to be getting ready to leave, so we reluctantly took turns away from our viewing location, calling activity reports to each other. I was still upstairs when Carole excitedly yelled, “Ron, there are four of them out of the nest. Now there are five! Now there are six!!” Needless to say, I hurried downstairs in amazement and delight to see this wonder. Before I could get there the first bold little wren had flown away from their perch and a second had flown a couple of feet to a nearby beam. I did see that second wren fly down to the lower deck rail and then later fly off into a nearby tree. And I did get to see the four remaining wrens sitting together and then one by one fly away from the nest site in different directions. We could hear the adults chattering their messages to their babies and we were excitedly doing the same as we urged, “Come on. You can do it. You can fly down and get your own food now. It’s not so far. Yes! That’s the way. You did it.”

The last of the six was the smallest and the most hesitant. Its big leap was more a flutter than a flight as its tiny wings slowed its descent to the floor of the deck. But then after a brief rest it actually flew fifteen feet and disappeared into the leaves of the trumpet vine at the corner of the deck, its short little tail clearly visible as it moved away from us. Now they are all off with their parents or on their own. We haven’t seen them since yesterday, but hopefully we will see them around from time to time. Maybe they will even grace our home with a nest of their own next year.

Carole had seen all six of the baby wrens make their first flights and I had seen five of them. We both had beamed with excitement and joy, ecstatic at our good fortune. An hour later and we would have been driving down the mountain and would have missed this big moment. The rest of the day was good as well. A few minutes after leaving home we passed a few feet from a mother turkey and at least three young turkeys a foot or so tall. As we came home in late afternoon, an older fawn, still spotted but much larger than a newborn, crossed the road in front of us and disappeared into the woods. And once we were home, the two mama raccoons came to our yard and our deck to get some needed nourishment; both are no longer as skinny as when they first started visiting. It was a very good day, an exciting day, made especially great by the flight of the baby wrens.

There wasn’t much time for pictures, but here are a few. 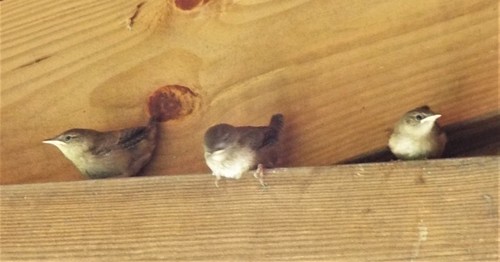 And then there were three.

And then there were two.

Come on. You can do it too. 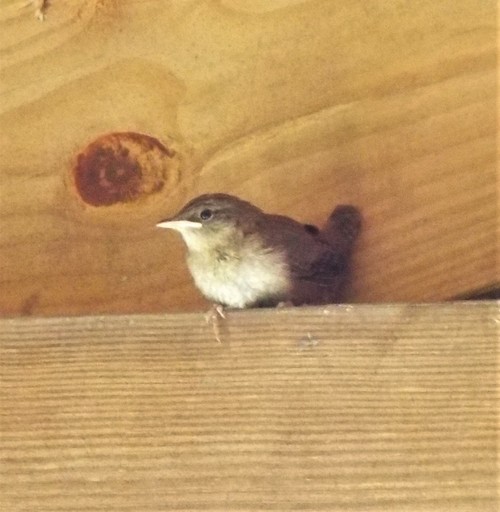 And then there was one. But not for long.

6 Replies to “An Exciting Day”