The weather this day is not especially unusual for mid-March here at our homeplace. It’s not extremely cold (19 degrees overnight and 21 degrees at noon), but we do have about ten to twelve inches of newly fallen snow on the ground and it’s still coming down steadily. Wind gusts tonight and tomorrow are predicted to be in the 50 to 60 mph range. The birds were attempting to get the few remaining seeds from the snow-covered food bowls, so we cleared containers, replenished the food supply, and moved the bowls to a slightly more sheltered location on the deck. We just made a path to our car, cleared snow and ice from the doors and windows, and drove the three-tenths mile to our mailbox to retrieve a package, making a bit of a track through the snow with our tires. The snow is incredibly beautiful, but it seems this might be a good day to post some non-snow photos. I hope you enjoy them. Remember, spring officially begins just six days from today. 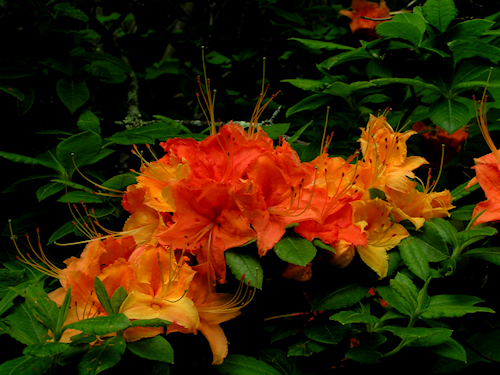 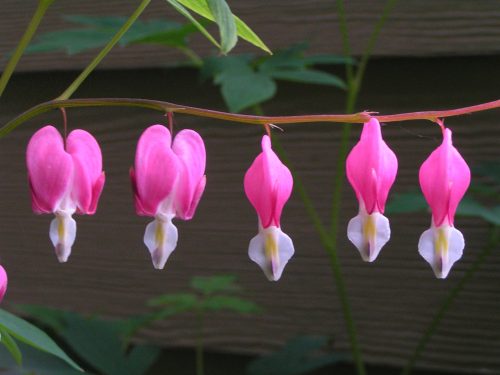 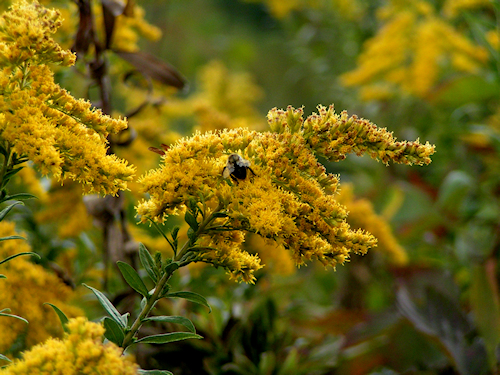 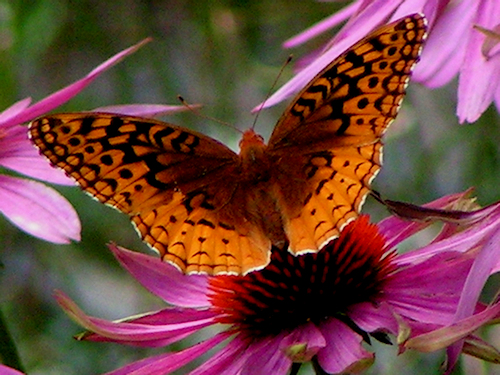 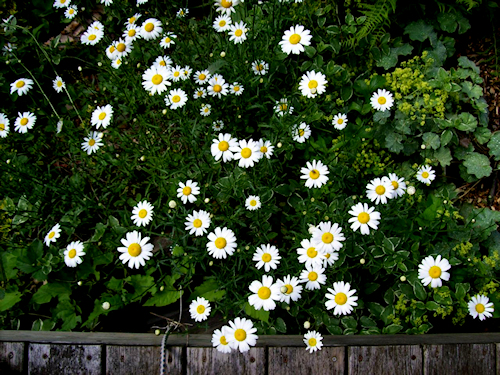 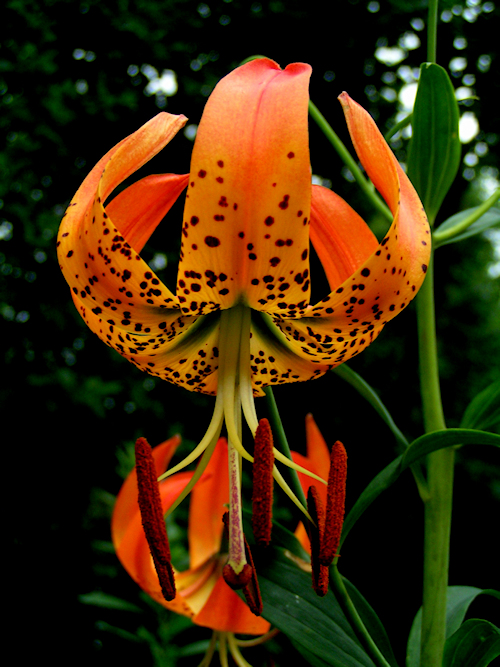 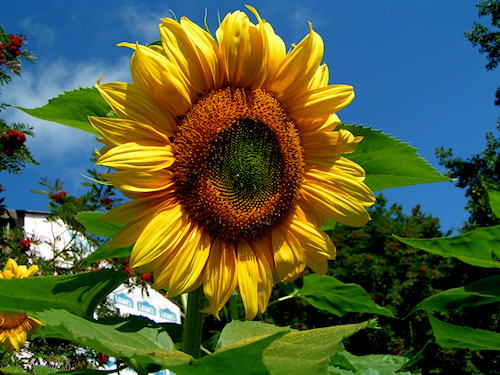 Bees on sunflower (planted by chipmunks) 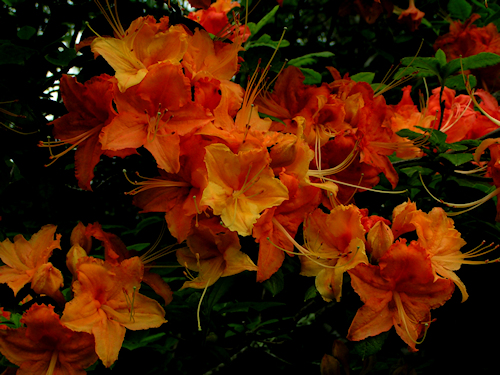 We have four varieties of squirrels living around us: flying squirrels, fox squirrels, gray squirrels, and red squirrels. The first two types have been seen by us only rarely. The flying squirrel has visited only once on a night a couple of years ago; it moved so fast snatching food on our deck that we barely saw it then. The impressive fox squirrels (about twice the size of gray squirrels) live primarily in the piedmont and coastal regions of North Carolina, but a small, growing population lives in the three county area which includes our homeplace. Still, we’ve only seen this rare creature twice and never before two years ago. Our most common encounters are with the familiar gray squirrels and the perhaps less-well-known little red squirrels, both of which are frequent daily visitors.

All of the squirrels are amazing to watch. I admire their agility and daring in moving from tree to tree, finding a path through the maze of interconnecting branches, sometimes leaping great distances or dropping from one tree to another. They climb the posts and beams on the deck, clamber down wires and chains to reach hanging feeders, and then hang upside down by the toes of their back feet while helping themselves to the seed or suet that was mostly intended for the birds. I can’t help but marvel at the intelligence and determination they apply to their pursuit of food, as anyone who has birdfeeders knows very well.

I enjoy observing all our wildlife neighbors, but I’m especially fond of the little red squirrels. It’s difficult to imagine an animal cuter than these characters. And the poses they strike appear so friendly, tiny paws clutched in front of their chests and big, dark eyes seeming to beg, “Can I please have some more sunflower seed now?” Who could resist such a plea? 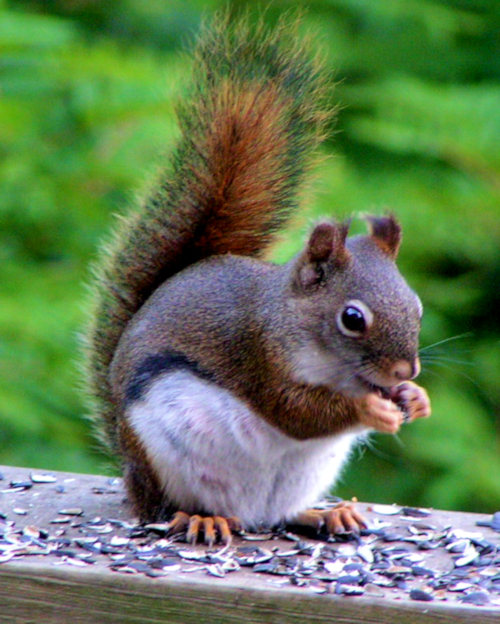 Who wouldn’t be charmed by this cutie?

The little red squirrels (notice that I usually add the adjective little; it just seems a natural part of their name) don’t appear particularly disturbed by my presence when I am near them on the deck. As long as they can continue eating, I can go about my activities; they are not bothered by me and I’m not bothered by them. They will actually come up to the food bowls while I am still adding sunflower seed or corn. Occasionally when I have been attempting to shoo one off a suet feeder so the birds can get something to eat, I’ve had to poke the little squirrel with my finger to get it to yield its place.

Other animals and birds aren’t tolerated as well by the little red squirrels, at least when it comes to food. We usually have at least two containers (bowls, trays, and pans all work) with sunflower seed or cracked corn available on the deck. Many times we see a squirrel enjoying its meal while sitting in one of the two food containers. Several feet away is the second bowl with plenty of food available for another squirrel to come and dine. Yet, if another red or gray squirrel approaches, it is likely to be charged by the fierce little red squirrel who was on the deck first. Back and forth they go, first contending over possession of one bowl and then the other. If the intruder is another red squirrel, it is likely to be persistent enough and fierce enough to eventually win a grudging truce that allows each squirrel to eat from its own container. However, if a gray squirrel is involved, it’s much more likely to give up and go elsewhere looking for food, even though it is twice the size of the little red squirrel. 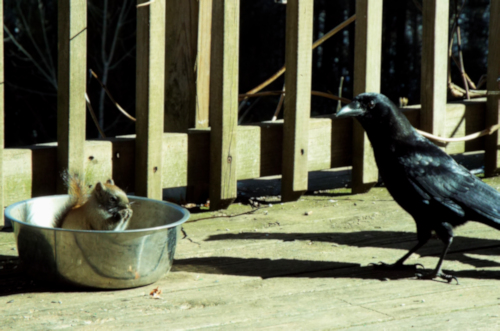 Recently we’ve observed several encounters with crows competing with the red squirrels for their share of the food. Crows also like sunflower seed and corn (and just about anything else that might be available) and are frequent visitors on our deck. Crows are surprisingly large birds. They also are very wise, very observant, and very cautious. But when they see a good serving of food waiting to be taken, they are willing to risk a confrontation. The bravest crow will land on the far end of the deck, usually backed by several of its companions. Gradually and cautiously the crow will begin edging its way toward the food, its zigzag path allowing it to check that we are not coming out onto the deck to interfere. It also keeps its eyes on the little red squirrel sitting in the food bowl, assessing the potential threat from the much smaller creature. A few steps closer, a few steps back, approaching first from one direction and then another, the crow moves toward the food. But eventually the squirrel makes its charge and the crow jumps away. The red squirrel is such a tiny little thing, but fierceness is not necessarily determined by size. No doubt the crow will eventually get some of the available seed, but only after the little red squirrel has its fill. What fun it is to watch their dance around the food bowl. 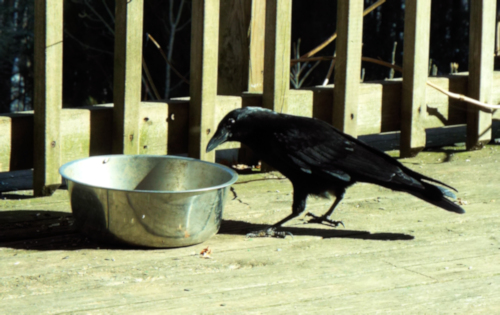 Sorry, but the little one ate it all this time.

When we found the property that was to become our home here on this mountainside, we were delighted to discover that there was a year-round spring in the woods near our proposed homesite. Hopefully we would not have to drill a well with all the uncertainty and expense that might involve. The spring did not produce a huge amount of water, but after making a crude dam across the spring’s outflow and measuring the average volume of water produced per minute we figured it would be satisfactory for our needs. So we had a potential source to supply our water needs, but that didn’t mean we would have free water. Both physical effort and financial input would be needed before we could make use of our spring.

The area around the spring was very boggy, so we had to do a lot of digging before we could isolate the main spot where the flow of water emerged from the hillside. We built a concrete catch basin to contain the water with an overflow pipe to carry the precious liquid to a 500-gallon reservoir about thirty feet away. The water could now be collected, but unfortunately the spring was several hundred feet from the planned house location. It also was situated at an elevation about fifty feet lower than the house would be, so there could be no gravity-fed water supply; we would need to pump our water uphill to the house.

Whenever we could install a pump in the reservoir we would be able to send our always-cold mountain spring water through a pipe (buried three feet deep to prevent freezing in the winter) to our house. But it would be another year and a half before we completed installing our house wiring and plumbing and received the inspector’s final approval. Once that happened we finally had our spring water on tap in the house, to enjoy at the turn of a faucet.

Enjoy it we do! Cold mountain spring water on demand, naturally chilled to about 40 degrees (the average year-round temperature of the earth through which the water flows to the spring). People pay a dollar or more per liter for spring water in the grocery store. We’re able to use it for watering the garden, washing clothes, showering, cooking, and best of all for drinking.

The work involved in accessing our spring water is not completely behind us. The spring has never failed us during almost 39 years living here, even during drought years. Pumps on the other hand have failed all too frequently. Sometimes the pumps have suffered from lightning strikes, but usually it’s just been wear and tear. Unfortunately, the equipment failures seem to occur during the night, rainstorms, winter, or all three. Correcting the problem usually requires multiple treks down the hill to the spring and back, carrying tools and replacement pump, working by flashlight, communicating by walkie-talkie to turn electricity off and on at the house, and checking to see if everything is working yet.

It may not be what most people would consider the perfect setup, but we believe it’s been worth the effort. At the end of a hot day working in the garden or whatever project we’ve been involved with, we can sit and enjoy a nice cool glass of our mountain spring water. Plus we have the satisfaction of knowing we made it happen.