A few days ago Carole had gone for a walk down our road. When she came back home, she wanted me to go with her to look at something she had seen. At the corner of the neighbors’ fence there was a pile of leaves that had been blown against the fence. But there was also something else that appeared to be a mass of feathers. Looking more closely we determined that it was a bird, possibly a flicker, which seemed to have been caught in the fence where it died. Its eyes were open, but it was hanging head down and unmoving.

I moved closer to get a better look. From about four feet away I could see that it was indeed a female flicker. Her body was within the two-inch space between the two layers of the wire fence, the tip of her long beak rested on the ground, her feathers were all ruffled in disarray, her wings were spread and caught at odd angles in the two-inch-wide rectangular openings of the fencing material. I thought I might have seen just a little flicker of light in her eye, but it could have simply been a change of sunlight hitting the open eye.

I decided to move around to a different spot on the hillside where I would be able to get much closer to the bird. As I moved within a foot or so of the bird, there was absolutely no movement. It seemed that the flicker had been inside the fenced yard, possibly searching for food on the ground as they usually do. Perhaps she had been alarmed by the dogs in the yard, and had become entrapped while attempting to fly through the openings in the fence. Unable to free herself and getting more entangled by her struggles, she had ultimately died.

Saddened to realize what had happened to this beautiful creature, I reached out my hand to gently stroke her soft feathers—a gesture to comfort myself since I knew the flicker would not feel my touch. But the bird suddenly cried out, tried to move her wings again in another futile effort to free herself. Startled, but ecstatic that the flicker was still alive I began trying to determine what I could do. A flicker is a large bird, bigger than a blue jay but smaller than a crow, with a wingspan between sixteen and twenty inches. But this flicker’s wings appeared so delicate and they were spread in different directions through the holes in the fence. Hoping that she was not already injured and that I would not add to any injury she might have already sustained, I tried to help with an escape. She remained calm and still as I moved my hands around her. Supporting the flicker’s chest and head with one hand, I began moving the wings, pushing the tips of each wing back until I could maneuver it into the same small opening with the bird’s body. When both wings were finally folded in close to the flicker’s body, she was compact enough to fit through the fence opening and slide down onto the ground.

We didn’t know whether or not the flicker was injured, but feared that either wings or legs might have been broken in her struggle or in my rescue efforts. The flicker sat still for a few moments looking around, no doubt exhausted from her ordeal as she was hanging in the fence for however long and trying to escape from that trap. Then she stumbled forward a foot or two and looked up toward Carole and back toward me. Just as we exclaimed with excitement that the flicker could move, she suddenly shot up into the air, flew over the fence and across the yard, and disappeared into the woods beyond.

We were ecstatic. Wow! What joy. A few minutes before, we were distressed that this beautiful but unfortunate bird had been trapped and died. And now we had seen her soar back into the trees. It had turned into a very good afternoon.

Yesterday as I was looking out one of our windows at an eastern phoebe who has apparently returned to our homeplace for another year of nesting and raising a family, I saw something much larger moving among the leaves on the ground. It was a male flicker. We don’t often see them close around the house; usually they are farther out near the garden or flying among the spruce trees. And then the male was joined by a female flicker, both of them searching among the leaves for a morning meal and climbing up the nearby tree trunks. I’d like to think that this was the same female flicker I had helped get free from the fence. Maybe she came around to let me know she was OK. If so, she is now happily back where she belongs and that makes me very happy as well. 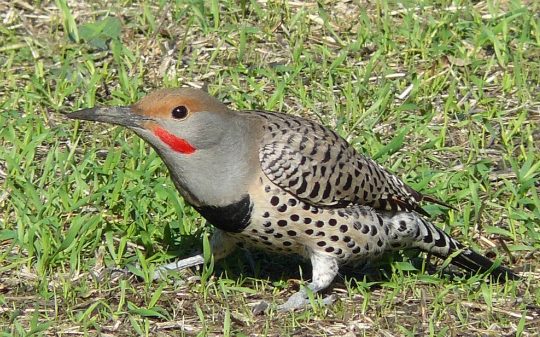 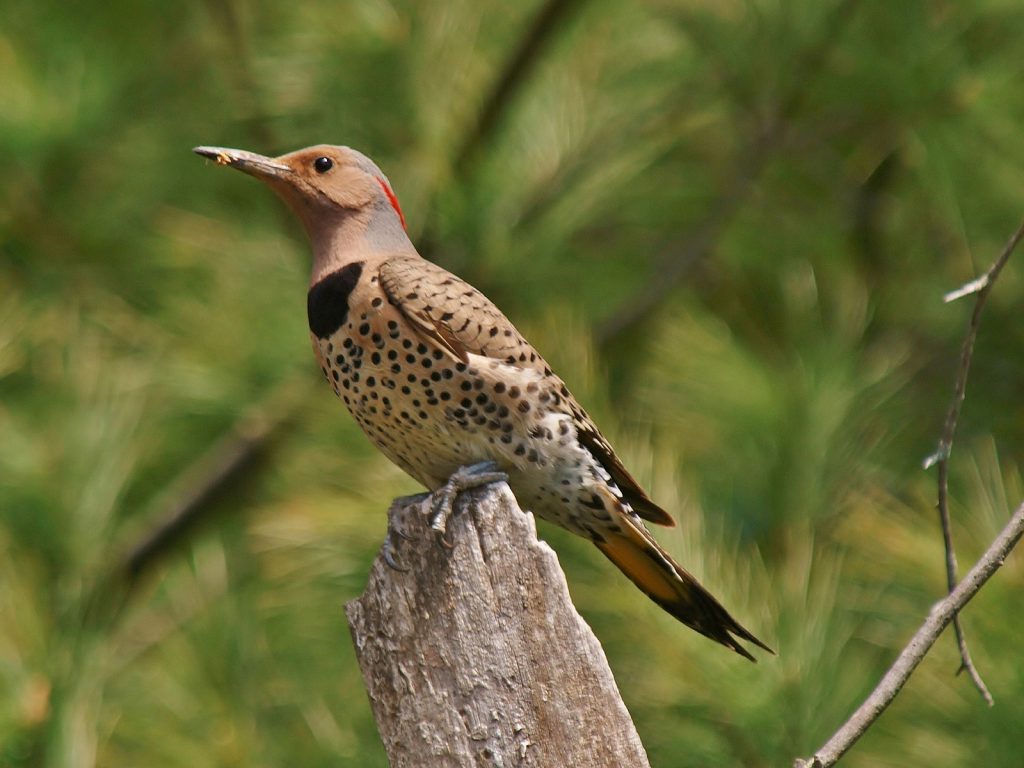 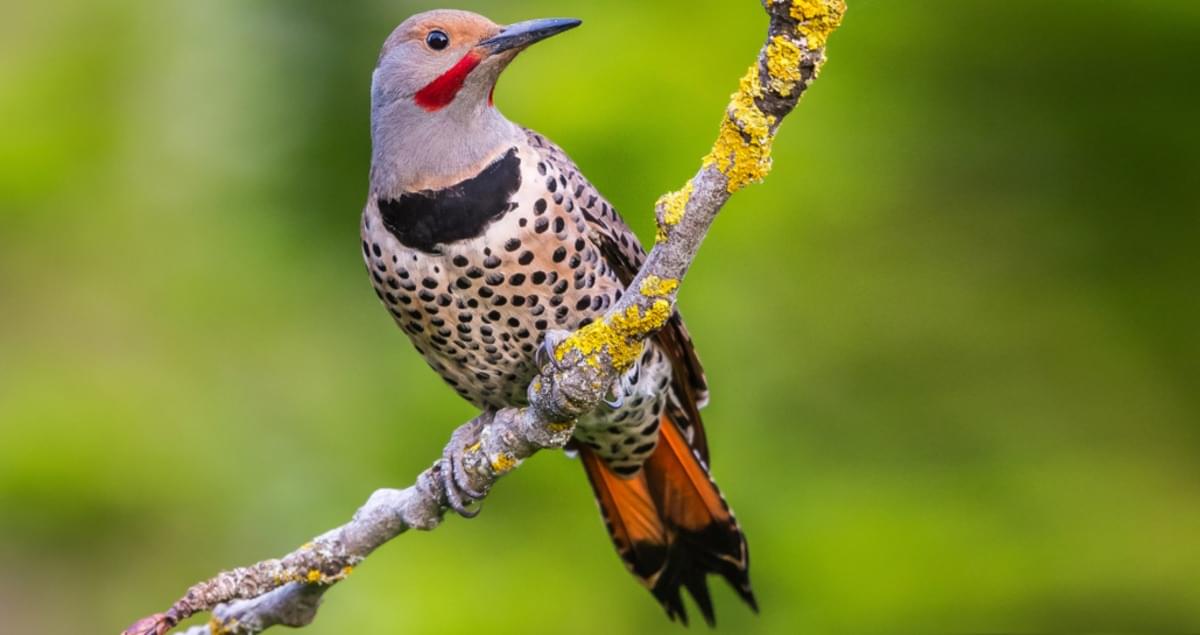 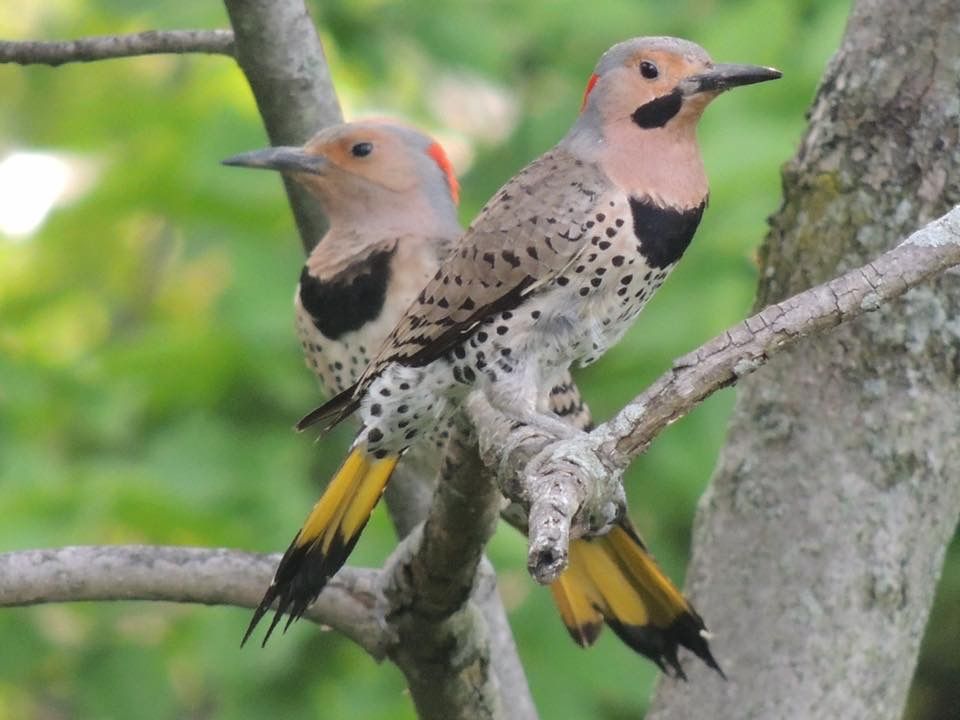 Thanks to Betsy Walker Chambers I have a few names to add to my attempted identification of the kids in the North Charleston Elementary School first grade classes photo which I posted recently. As before, I would urge you to view the pictures on the largest screen possible so you can enlarge the image to see the faces more clearly. The additions to the spreadsheet are highlighted in a pinkish color. Also Teka Rogers Pierce advised that I was wrong in my guess that she was in the picture since she didn’t attend NCES until later. Likewise, Al Hall, Randy Wright, and Sherry Johnson Gooding were not in first grade at NCES so we shouldn’t look for their cute younger faces.

I would love to have names to put with all of our classmates. If you can identify others or at least point out your own younger self, I would really appreciate a brief message with that info so I can update the spreadsheet later. Carole recently was delighted to access a photo from 1920 showing and naming the staff and student body of the small school in Jackson County, North Carolina, where her grandfather was principal. Our class photo with names might make some future researcher very happy. 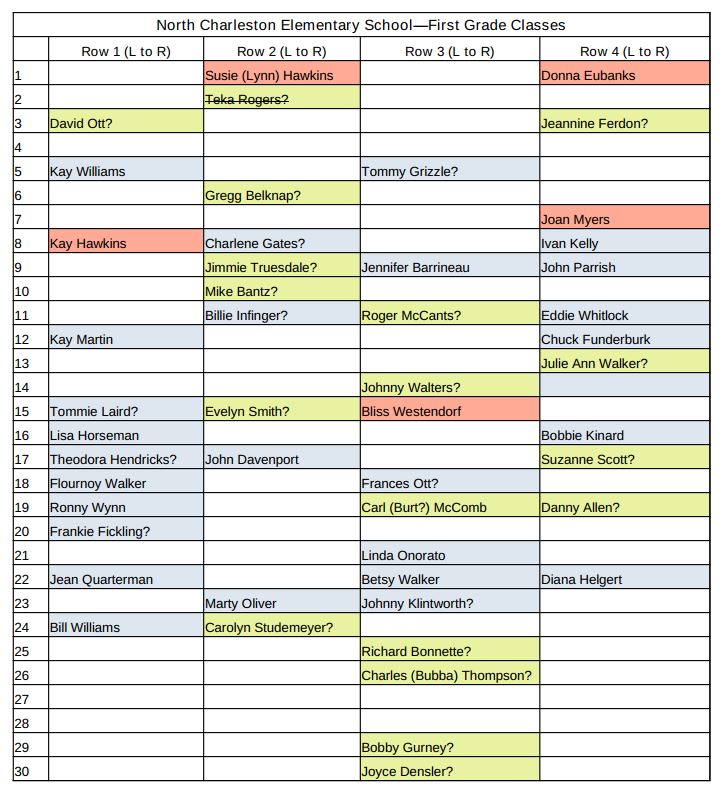 I also found the 1960 edition of the North Charleston High School yearbook online. Since I don’t have a physical copy of any of my yearbooks except the 1963 edition, I have enjoyed looking back at these photos from our “sub-freshman” year. I’m including the class pictures in this post in case others might also like to have a look. Fortunately names are given for these photos so we don’t have to strain our memories. I hope you enjoy remembering our classmates. 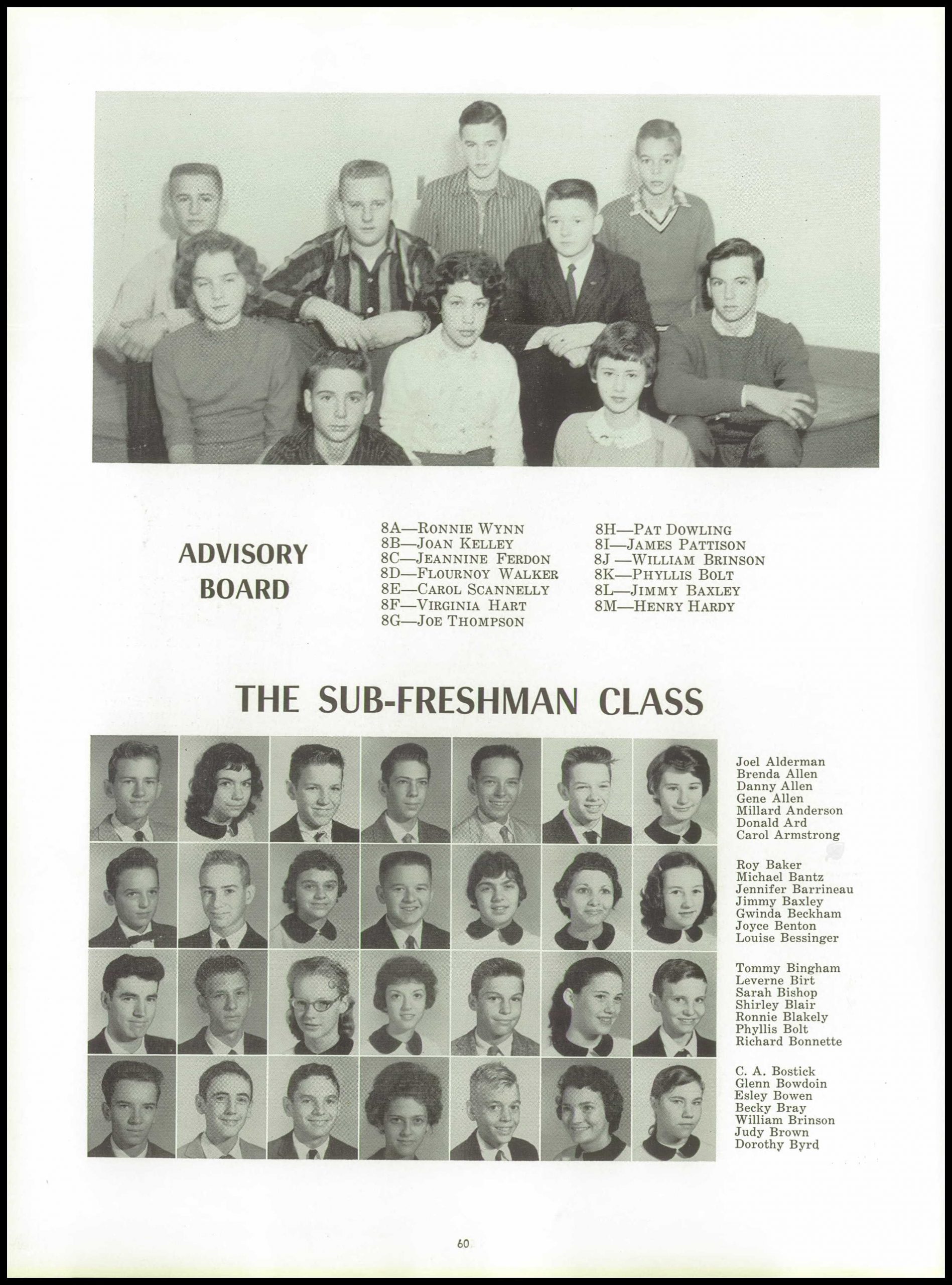 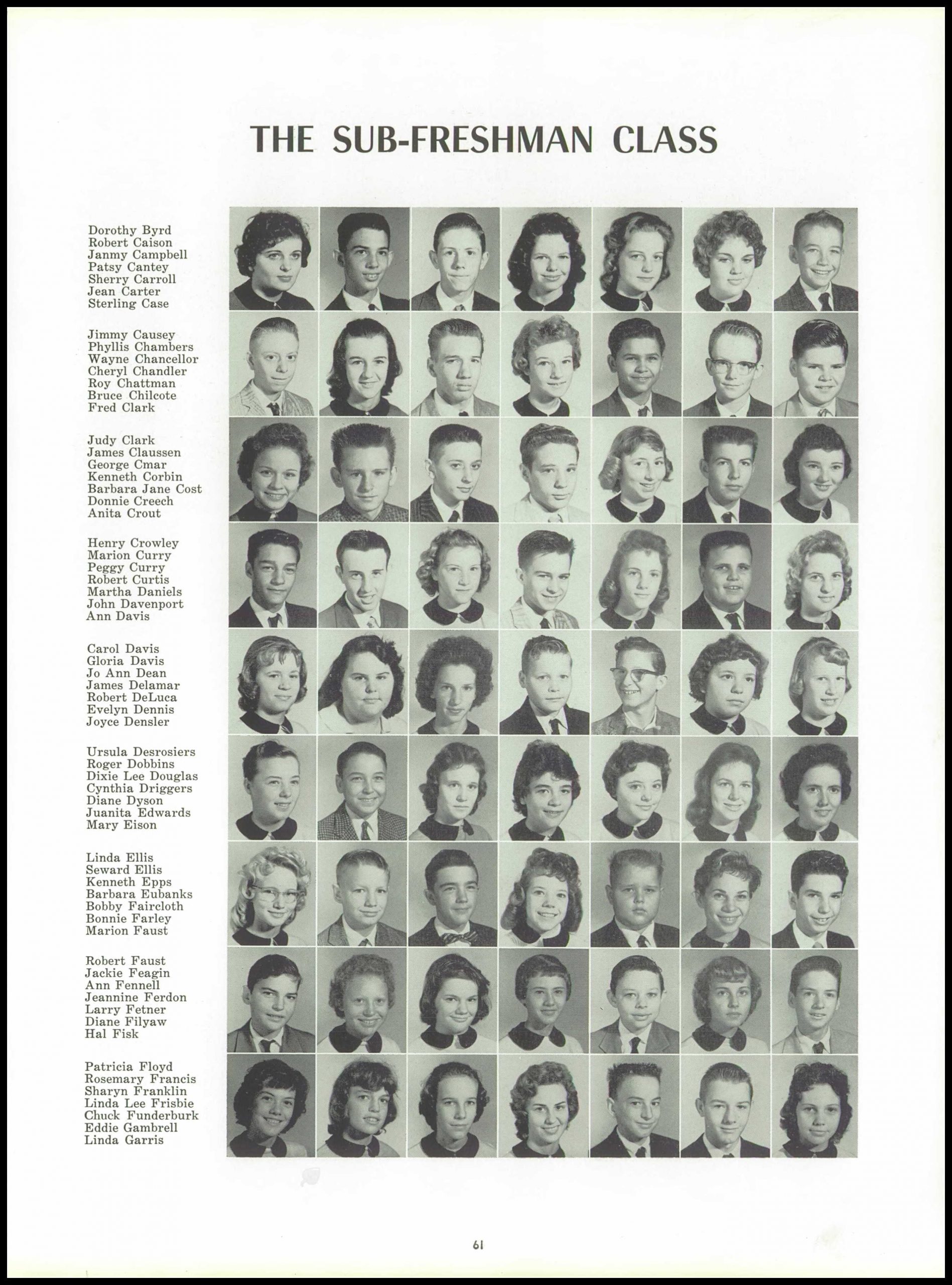 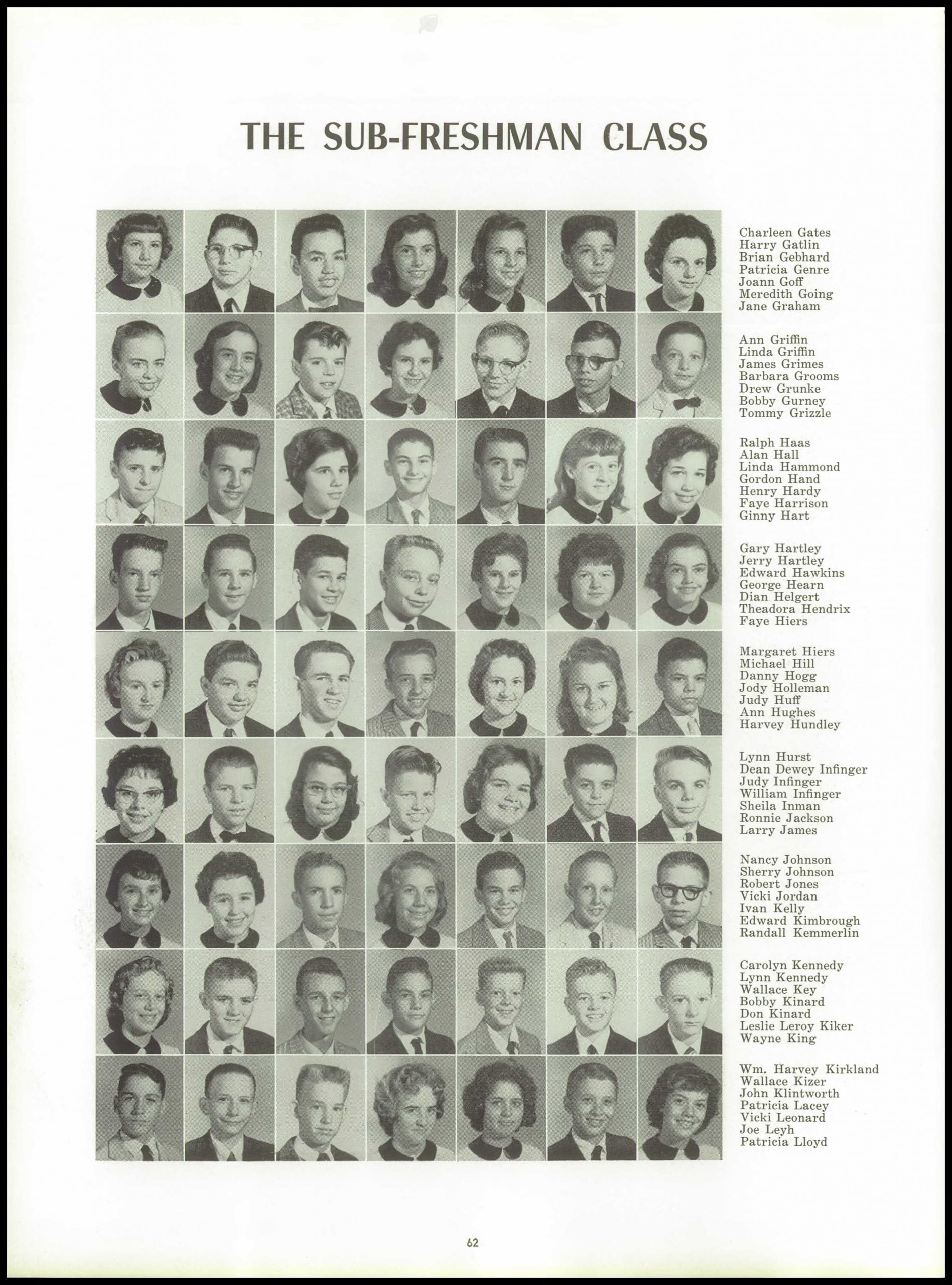 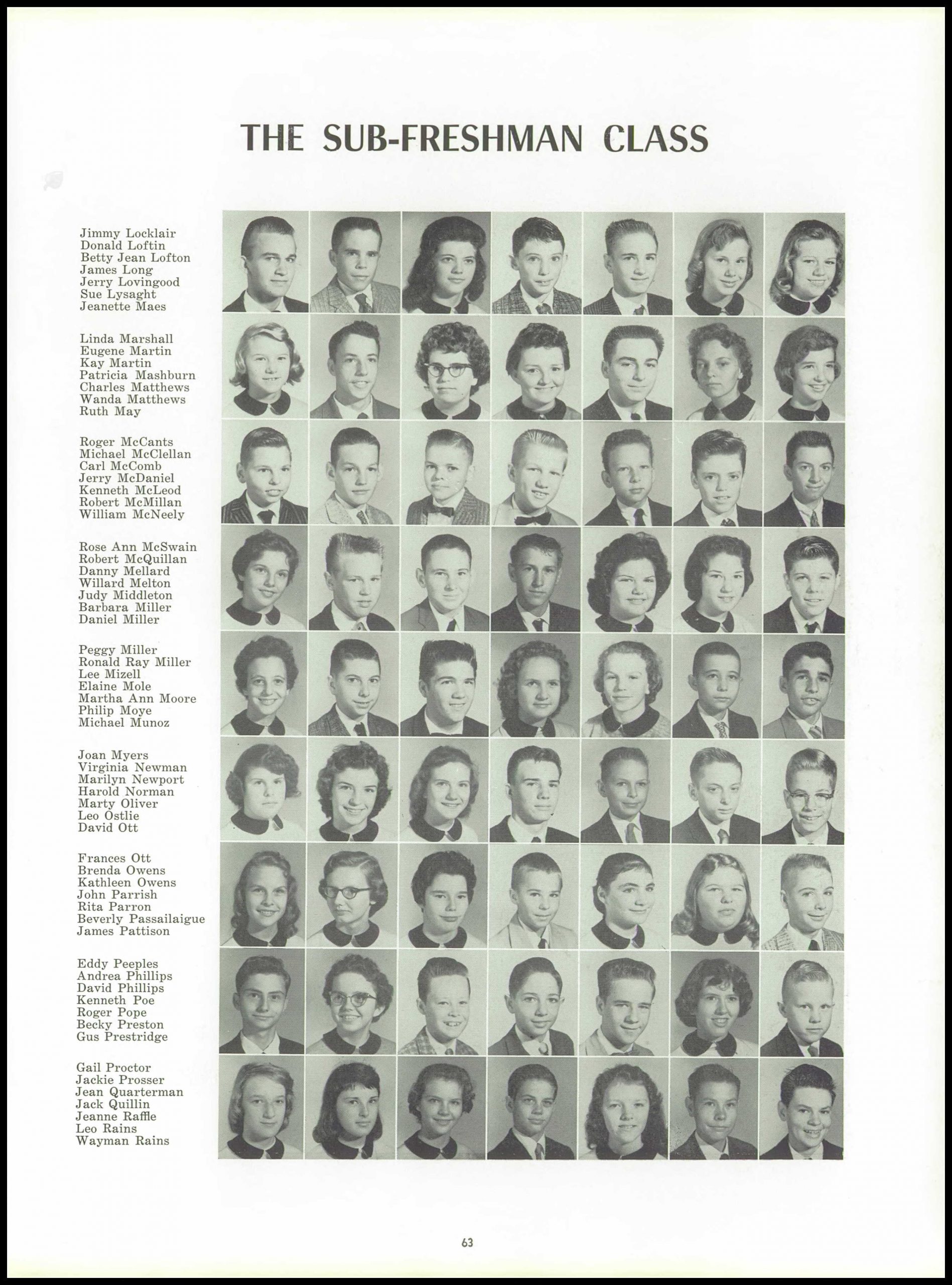 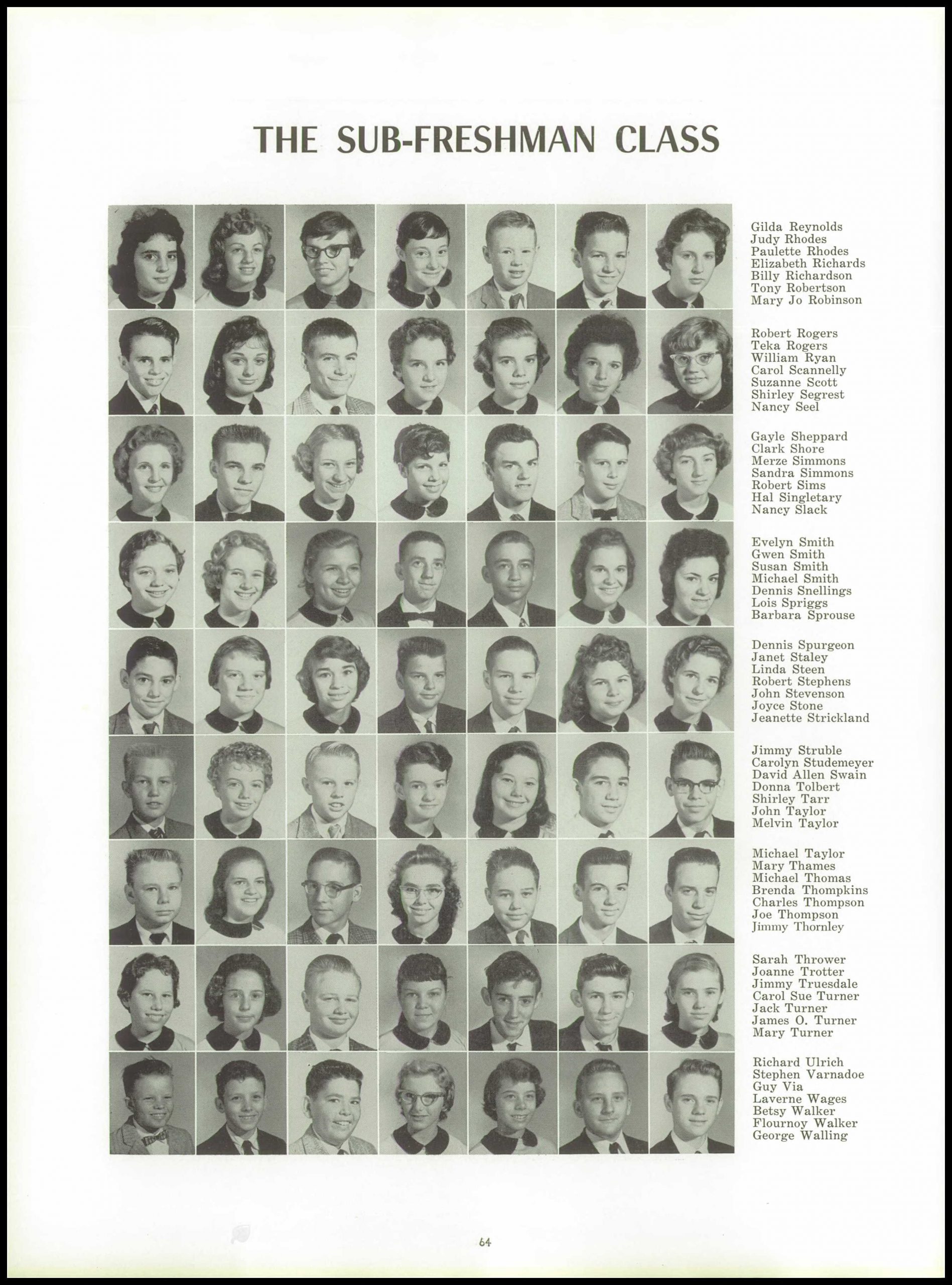 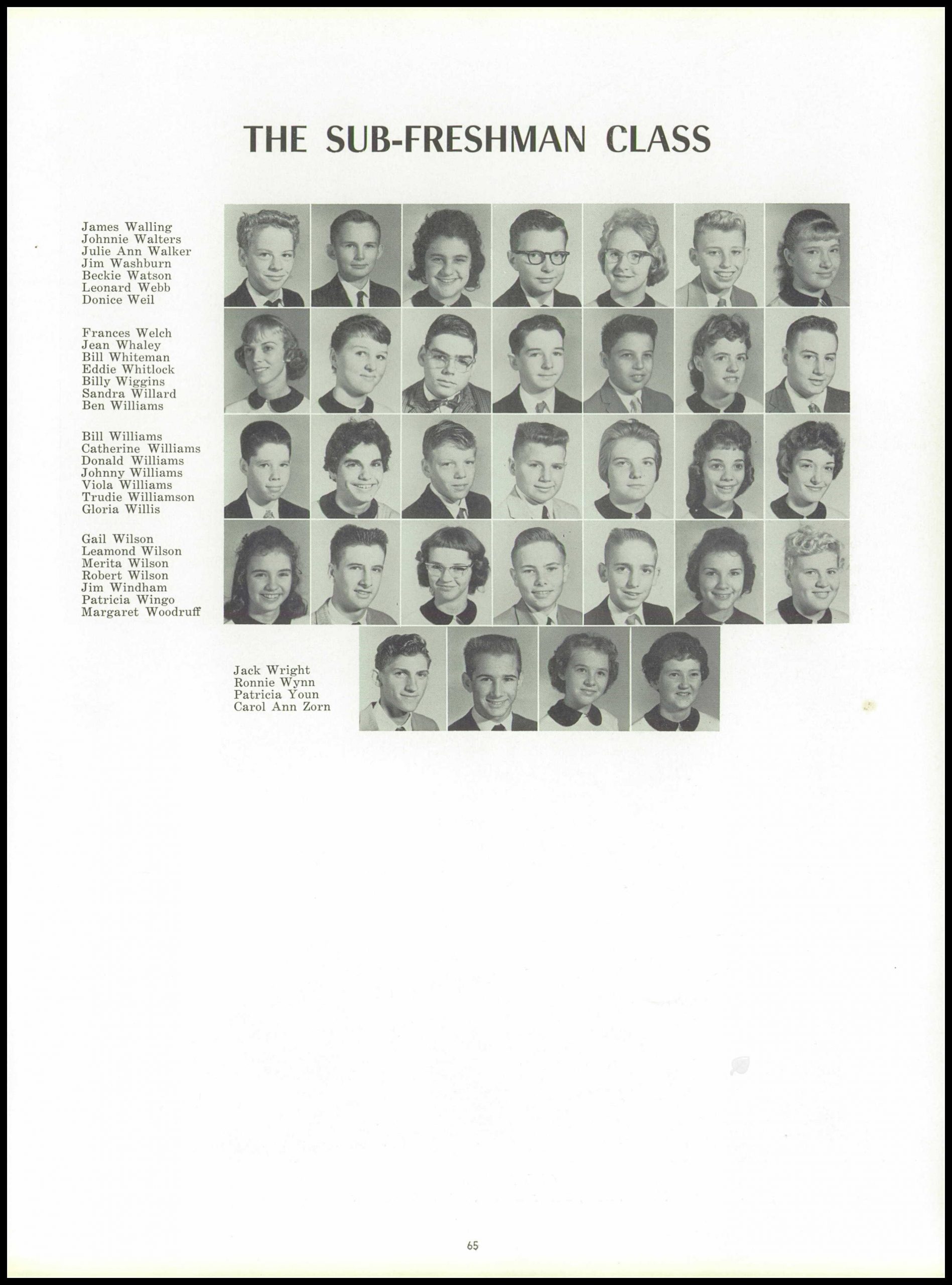