We made a short trip to town this morning to get a favorite breakfast and take care of a few errands. We were gone for about three hours, not enough time for much to happen.

Along the road new patches of daffodils were opening, seemingly around every curve. Pairs of doves were searching for food on the roadside in many places. In recent years many doves have found their way farther up the mountain to treat us to their gentle cooing calls and the whistling of their wings as they fly.

The driver in a red pickup truck was in a great hurry today as he pulled up no more than twenty five feet behind me. He stayed there all the way down the six miles of curvy mountain road until we got closer to town.

At the local Waffle House, our favorite place for a wonderful breakfast, the familiar staff were as delightful as always, working quickly in crowded quarters, all the while smiling, laughing, and enjoying each other and the customers.

At the next table were a father and two young teenage girls, one with blue eyes sparkling even more than her excited conversation.

At the local big box store I proceeded to pull a shopping cart from the mass of waiting carts. A woman even older than I am had gotten out of a car at curb and walked with difficulty into the store. I passed my cart to her and was greeted with a big smile and a surprised, “Oh, thank you”. I heard her later inside telling her companion, “I had wanted to get a smaller cart, but I didn’t see any.” Hopefully I didn’t keep her from getting the cart she wanted.

The next cart I pried loose had a noisy, wobbly wheel. As I was putting it aside, I told a woman who was getting her own cart, “I got that wheel last time. I’m not gonna take it again”. She cheerily responded, “I always get the worst one”.

Seeing a college-age woman coming into the store with a worried look on her face, I wondered whether she was troubled about something or just deep in thought. That made me imagine what might be the concerns of each of the hundreds of people in the store at that moment.

Traveling to our next stop we passed an ancient oak tree, its gnarled branches twisting outward in every direction. It stood alone in the edge of a pasture, drawing our attention and a comment, “That’s a great tree.”

Driving the road from town to our homeplace we passed several old, abandoned houses along the way, several collapsing into piles of decaying lumber. One somewhat leveled spot in the edge of the woods had a small clump of bright yellow daffodils marking this as the site of the long-ago house of a long-ago family.

We noticed a new fence in the back yard of a house that had been vacant for several years after the child moved away and the parents died. The large shaggy dog lying in the yard was gazing off into the distance across the creek. At that moment the Carrie Newcomer song “Learning to Sit with Not Knowing” was playing on the car CD player. That reminded me of a drawing depicting “mindfulness” which showed a man and a dog walking toward a wooded landscape with the sun setting beyond. The thought bubble above the man showed his concerns about all the tasks he needed to be doing, problems with work, money worries, etc. The bubble above the dog showed the scene before them: the trees and the setting sun.

We passed a neighbor’s young dog who seems to spend all his time chained outside a small shed beside the road. He was probably a rescue dog, skinny and fearful-looking when he first came to this place. He’s more robust looking these days and always appears happy to see us when we pause to greet him. Today he was lying outside his shelter, basking in the warm sunshine after a few cold, wet days.

At home again we put up three bird feeders filled with the black oil sunflower seed we had just bought in town. By the time I got back inside, two young deer who visit frequently were looking quizzically at the feeders and checking some favorite spots for the corn I sometimes put out for them. I quickly got some corn and took it out; the crows found the new treat first but there should still be some left when the deer return.

While putting out the food for our visitors, I noticed that periwinkle blooms are beginning to show in the front yard, small, bright blue flowers on evergreen vines that continue to spread. We have seen periwinkle patches along roadsides or in wooded places where once there were homes. Our plants came from Carole’s parents’ home and from the long-ago homesite of her third great grandparents which we discovered some years ago in the woods alongside a creek named for their family. We’re glad that now they mark the site of our homeplace here on the mountain.

These were our few encounters on this Saturday morning—moments of meeting and moments of meaning.

We just ran out yesterday to get a bag of flour. But this was not just any flour. It is supposed to be “soft” flour. We weren’t really sure what that meant, but a little research showed soft flour is made from soft wheat which has less protein and lower gluten content. It is generally what is used for cake flour and for great biscuits. We didn’t especially care about those facts. This was a good excuse (as if we needed one) to take a break from several days of writing and house addition planning. It also was good reason to get out into the bright sunshine on a warmer-than-it-has-been day and drive seventy-five miles or so to Boonville, North Carolina to the Boonville Flour and Feed Mill and its companion store, both built way back in 1896.

The store had lots to choose from and we didn’t resist getting more than just the flour, as can be seen from one of the accompanying photos. In addition to multiple types of flour and baking mixes, there were candies, pickles, canned veggies, sorghum molasses, and almost any type of preserve, jelly, and jam one could possibly want. There was even one jar labeled “Traffic Jam”; I meant to check the ingredients on that one, but unfortunately got distracted.

While the flour mill store was great, a trip off the mountain at this time of year is always a treat. We got to see spring working its way up the mountain as we drove to the lower elevation. And when we got down to Wilkesboro and beyond, it was delightful to see how many plants were in full bloom and how much more the trees and shrubs had leafed out in the short time since we had been there on another day out. Of course taking a few pictures is always part of our travels. Here are a few. 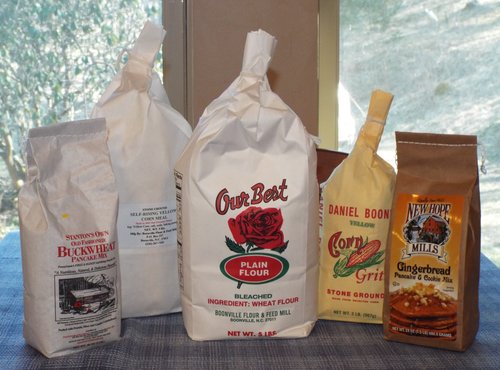 Some of our flour selections 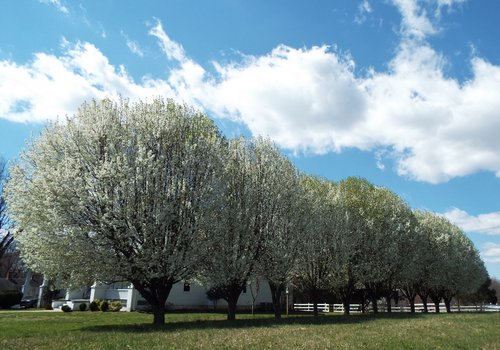 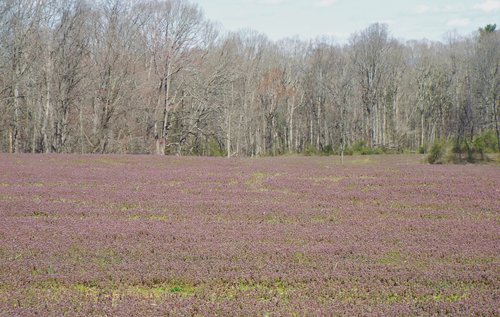 One of numerous fields carpeted in lovely “weeds” 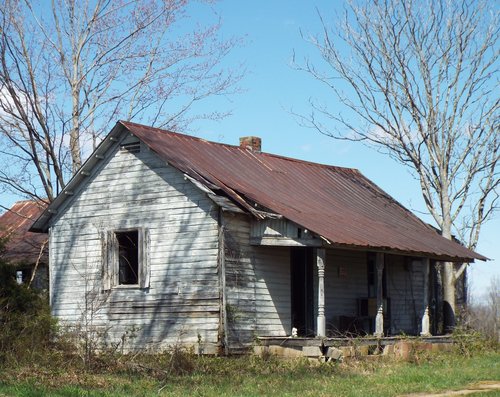 I can’t resist an old farmhouse. 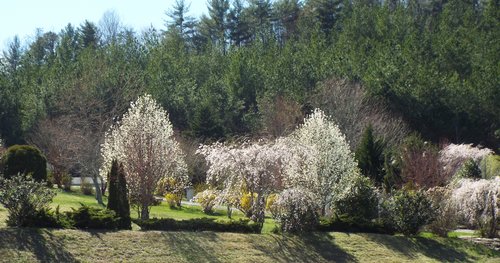 These beauties watched us while we were watching them. 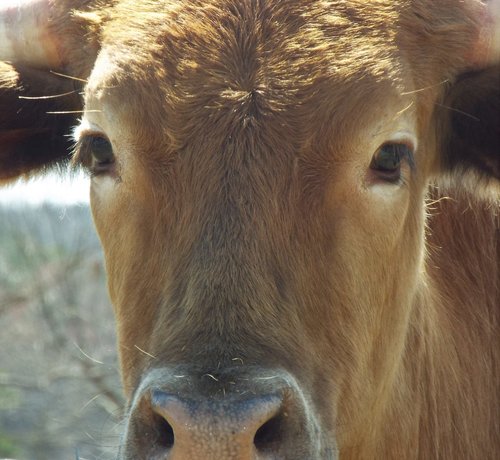 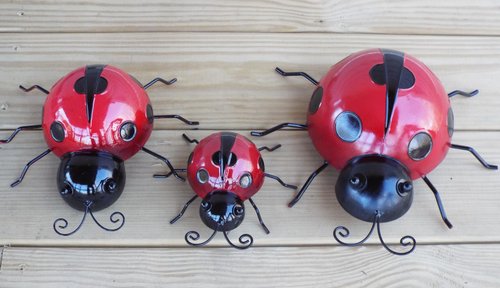 We even found a few ladybugs for the wall of our little barn.

As I was driving home from town a few minutes ago, I saw several flocks of robins along the way, some within a half mile of our homeplace. These are the first flocks I’ve seen here this year, though I have noticed a couple of isolated individuals during the past week or so. Flocks of robins are a sure sign for us that spring is coming; unfortunately it means that spring is probably still at least a couple of months away. The robins always seem to come too early up here, usually after a period of mild weather and just before some more snow. In fact, as I am writing this, big flakes of snow have begun pouring down and the ground has been quickly covered. Only an inch or two is expected with this system, but many of our biggest snows have come in March or April. There surely will be more winter weather before spring actually arrives at our homeplace, probably sometime in May. Maybe the robins will fly to more hospitable locales not too far away for a few more weeks.

One of the benefits of living on this mountainside is that we get to enjoy the changes of the seasons each time we leave home. While the snow covers the ground here today, there may be no snow at all in Boone which is about a thousand feet lower than our homeplace. We won’t see flowers and leaves on our trees for at least two more months. But when we go into town now, leaf buds are showing red on maple trees, hints of green are visible on willows and shrubs, and even a few flowers are peeking out. We went off the mountain (another couple of thousand feet lower) for a few days earlier in the week and were treated to blossoms of cherry and pear trees, redbuds, flowering quince, and lots of daffodils in full bloom. Returning home we get to enjoy the changes in reverse. In spring we are able to see the greening of the mountains as it works its way from bottom to top. In autumn the changing leaf colors progress from top to bottom. When we want something different, we just go higher or lower.

Spring is truly a delightful time of year, but so are the other seasons. Each has its own unique experiences and treats for us to enjoy. Some people definitely prefer one season over the others and winter is not usually the top choice for most people, especially after long spells of too cold winds and too much snow and ice. But for now I’ll enjoy watching the falling snow. The coming of spring will be that much more spectacular in contrast.