It has been almost three months since my last blog post—a bit of a break after the process of writing my seven-part series leading up to my cancer diagnosis, surgery, and the recurrence of my cancer after surgery. Many readers of my words and Carole’s posts have sent positive thoughts and comments our way. We appreciate them all. Some of you have gotten further periodic updates through in-person contacts or correspondence. For those who have not known the status since then, I wanted to bring you up to the present.

When I posted on September 10, the expectation was that I would begin radiation treatments as soon as possible. Additional scans and time needed by the radiation oncologist and the medical physicist to calculate and plan the dosage and targeting for my treatment meant radiation did not start until September 30. The schedule called for treatment sessions at the local cancer center five days a week for eight weeks. It was going to be quite a change from the relatively unscheduled life we’ve lived since we both retired.

To jump forward eight weeks, I completed the course of my radiation treatments on November 22, a few days before Thanksgiving Day—good timing because we were certainly thankful to reach that milestone. Throughout this period I have had no noticeable physical symptoms from my cancer and have experienced no additional problems or negative side effects either from the cancer or the treatment. Apparently when someone has radiation treatment for recurrent prostate cancer such as mine, there is no clear-cut evidence that the radiation has destroyed all the cancer cells. However, my hormone therapy, which is supposed to stop the growth of prostate cancer cells, has continued while I have been receiving the radiation therapy. My PSA level, which indicates prostate cancer cell activity, quickly dropped to undetectable after the hormone injections began—the anticipated and desirable result. So, even though the uncertainties of living with cancer are still part of our lives, our actions to deal with these uncertainties continue.

The entire cancer center experience has been wonderful to put it into a single word. Beginning with my first appointment back in August, the entire staff made each day pleasant and enjoyable. The receptionist who initially greeted me, the oncology nurse, the social worker, the radiation technicians, the radiation oncologist, and even other staff with whom I had only brief contacts were all exactly the type of people I would have wanted to be with me during this time. Most of my contact time was with the radiation technicians each day; they talked casually and joked around with me, were understanding when my body was sometimes not cooperative with their scheduling needs, and made me feel totally comfortable every step along the way. The oncology nurse was always eager to be sure I was not having any problems or difficulties with my treatments and to offer any assistance needed. The radiation oncologist, who had a background in social work before becoming a physician, spent lots of time talking with me before treatments began and throughout their duration. He was never rushed to get on to his other responsibilities, but made himself available for answering any and all questions, telling me what to expect at each stage, sharing information about latest medical studies and various treatment options, getting my thoughts and inputs about any concerns or developments as treatment progressed, and always asking how I wanted to proceed. When people have to deal with difficult medical situations, their support teams should always be as great as mine has been.

The actual time I was on the table for the radiation treatment each day was only about five or six minutes. Whether that brief period at the cancer center came in the early morning or later in the middle of the day, it resulted in a necessary but significant interruption of other activities. Everything had to be planned around the timing of my treatment each day. To have my body in the most cooperative condition for the radiation to be targeted effectively, I even had to figure out the best timing for eating and drinking—a meal or decent snack about eight hours before my appointment and twenty or more ounces of water about an hour before—though neither of these plans could be counted on to be exactly right. Travel time also had to be considered. Even in Boone, traffic can be an unpredictable problem—we have fewer alternative routes to get to a given location. We usually planned to allow forty-five minutes to get to my appointments, but changing school hours, lunchtime congestion, and snowy roads sometimes caused challenges. Our time at the cancer center ranged from thirty minutes to an hour, sometimes longer when there were delays or when we had a meeting with the oncologist to discuss progress and to plan details of treatment. While we were in town we fitted meals, other appointments, errands, and activities into the remaining time each day before heading home again.

Going back and forth to town each day this fall has given us many more opportunities than usual to see the colors as they spread across the mountainsides, not the most spectacular leaf season, but certainly it has been beautiful with leaves in shades of yellow and gold and bronze and occasional touches of red. We’ve also been treated to seeing a number of deer, including young ones, as well as wild turkeys, chipmunks, and woolly worms (also known as woolly bear caterpillars). At home the robins feasted for weeks on the abundant crop of mountain ash berries while numerous other birds (some of which were new varieties to us) have been very, very active close around the house. And we’ve been delighted as a couple of young mother raccoons at various times have brought their very tiny babies onto our deck, continuing a tradition that has extended over many generations. We can lie on the floor beside our glass doors watching them eating, just a couple of feet away from us. One day we stayed there for an hour or more. We do love being here.

As some readers may have seen on Facebook posts, Carole and I have also spent a great deal of any free time we’ve had during the past several months completing a book about her mother’s life which Carole has been researching and writing for the past two or three years. The writing had been finished a while back, but the final editing and formatting to prepare it for publication still had to be done—a demanding process to put it mildly. We still needed to go through it all again and again, page by page and often line by line, to adjust things to get the appearance of each page to be what we wanted.

Since I was chiefly responsible for formatting the text I had to remember how to get the writing program to handle things like pagination and photo placement without messing up other aspects of the design. And I had to figure out the pictures and text for the cover design and get that all to mesh with the requirements for printing. I had done those tasks for Carole’s 2016 book about her dad’s life, but I seem to quickly forget details about how to do such things when they are not my regular activities. It would be so helpful if the people who develop various computer programs would also write clear and easily understandable directions regarding how to accomplish various tasks using their programs. It has been a real challenge. Many times I would attempt to follow the few directions I could find, only to have the steps I took undo some of the editing I had previously done—very, very frustrating.

Many days we would each sit at our computers for twelve hours or more, comparing text and making adjustments until we got it right. But we did finally get it finished, submitted, approved, and printed. We didn’t quite have it completed for Carole’s mother’s ninety-sixth birthday in October, but we were very excited to take her a finished copy in mid-November. Anyone interested in seeing the results of our work can find the books on Amazon.

With my cancer treatments and the book editing behind us for the present, we were able to schedule some other activities which we have had to postpone for several months. So yesterday I was finally able to have the cataract surgery on my left eye which had been anticipated since August. The surgery was done in Hickory, about a ninety-minute drive from our homeplace. The travel was not a big deal except that the mountains were blanketed with dense fog when we awoke. Of course, we’ve had lots of experience driving in fog. It’s common here in the mountains for visibility to be limited to a hundred feet or less as the clouds cover the higher elevations and sometimes the valleys as well. But it always causes anxiety, especially when trying to get to a scheduled appointment. The trip was uneventful and we got below the fog about halfway to our destination. The surgery was also uneventful. I was amazed at the change in my vision when I awoke this morning. I could see more clearly with my left eye than during the previous several years. Everything in my world was suddenly brighter and more colorful. For the next four weeks I’ll be putting two or three types of drops in my eye each day. Then I’ll be going through the same process again starting on New Year’s Eve when I have surgery on the other eye. But, with all the beauty that surrounds me here at our homeplace, I definitely look forward to having an even better view of this world.

I’ll share a few photos which I’ve taken during these recent months. I hope you enjoy seeing these sights as much as I have. 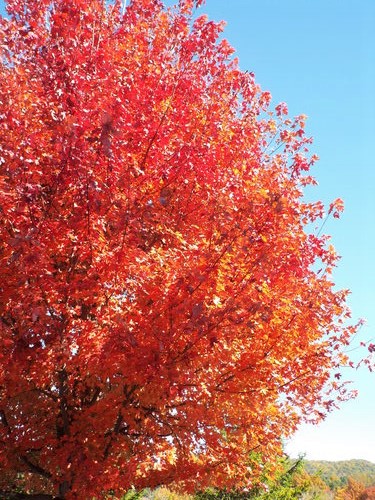 A brilliantly colored tree near the cancer center this fall. 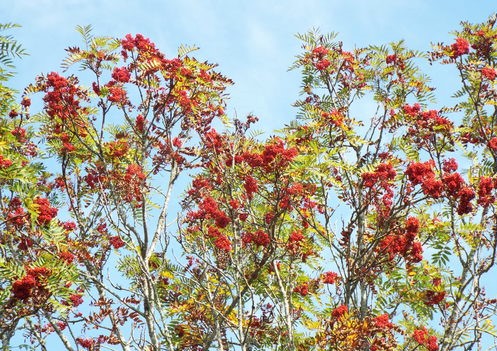 Our mountain ash trees were loaded with berries this year. 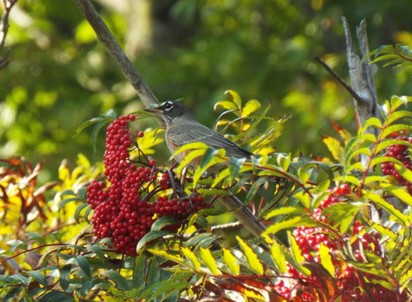 One of the robins who helped clear all the mountain ash berries. 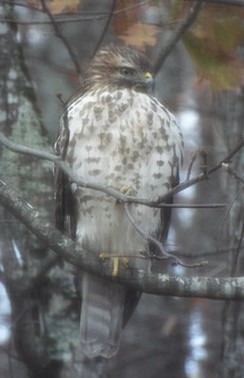 A young hawk just outside our window one morning. 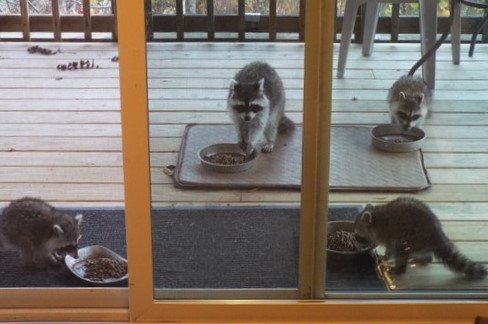 Momma raccoon and three babies having an early supper. 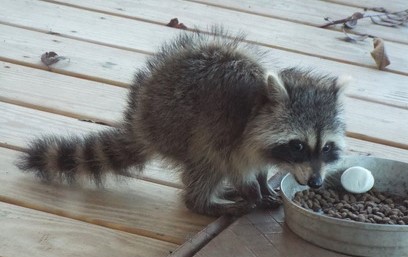 One of the raccoon babies who hasn’t discovered the marshmallow treat yet. 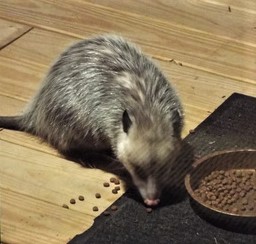 We feed more than just our raccoon visitors. 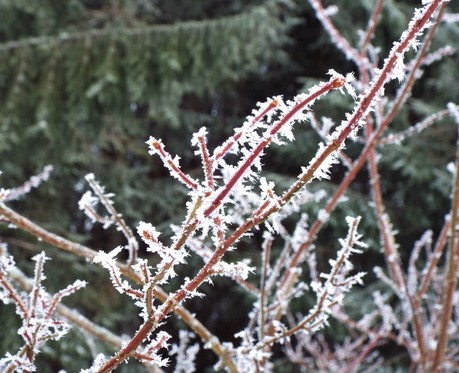 Hoar frost occurs when fog freezes onto everything. 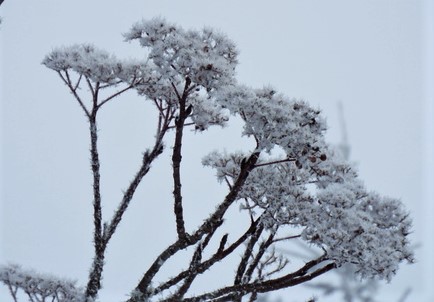 Mountain ash branches with hoar frost instead of berries. 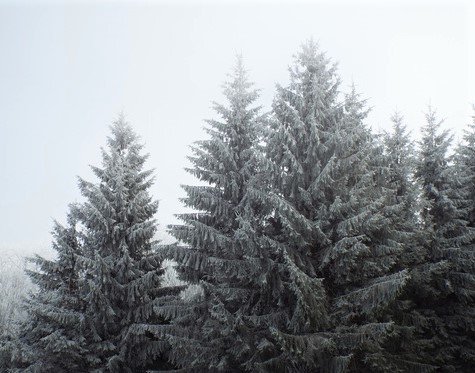 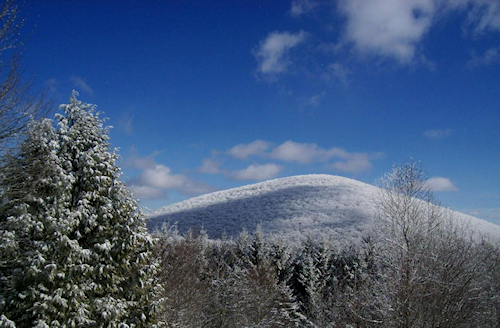 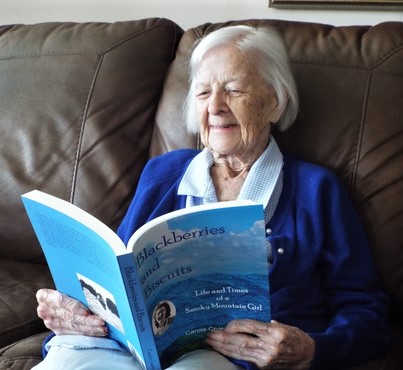 Carole’s mom having her first look at Carole’s book about her own life.